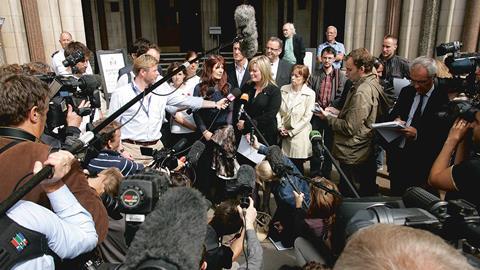 The judges of the Law Society Excellence Awards have an embarrassment of riches from which to choose. Week in, week out, the Gazette carries stories of exceptional solicitors providing an exceptional service to clients. For instance, vulnerable individuals are taking their cases to the Supreme Court.

Other cases are forcing government U-turns or insurers to compensate a person who has been grievously injured. English law, moreover, is the law of choice for international commerce, with British lawyers advising on infrastructure, energy, maritime and constitutional matters worldwide.

It is a tough job, but let us not waste our sympathy on the judges. Instead, why not make their lives even more difficult by submitting a nomination for one of the award categories? The deadline for submissions is 6 June and the award ceremony is in London on 9 October.

But we are racing ahead of ourselves. To improve the chances of your nomination winning, you need to know where the judges start. How do they sift through the thousands of worthy candidates to crown just one firm the best for business development & innovation, for example, or best for diversity & inclusion? And how do they choose from those many thousands of individual solicitors sitting in offices from Berwick-upon-Tweed to Cornwall, from Aberystwyth to Great Yarmouth?

That was the question the Gazette put to one of last year’s judges, Law Society deputy vice-president Jonathan Smithers. He says: ‘False modesty is not required. We are looking for a firm or individual who stands out over and above the rest. Every nomination is scrutinised minutely and so it is crucial to complete the entry form carefully.’

Smithers, who is a partner at Tunbridge Wells firm Cooper Burnett and also chair of the Law Society’s conveyancing and land law committee, helped judge three categories last year: Legal Business Woman of the Year, Junior Lawyer of the Year and Excellence in Conveyancing Practice. ‘The first two categories are not my natural constituency and so I was able to judge them with fresh eyes,’ he says. ‘It’s very rewarding to be able to judge practitioners from a different perspective.’

He cautions that firms that routinely handle high-profile cases cannot rest on their laurels. ‘They have to demonstrate that they have gone the extra mile,’ he adds.

The Gazette Legal Personality of the Year award is now in its fifth year. Civil litigator Des Collins, founder and senior partner of Watford firm Collins Solicitors, was first to win the accolade in 2010. He rose to prominence through acting on behalf of children born with birth defects after their mothers were exposed to toxic waste during the demolition of the British Steel works in Corby, Northamptonshire. The negligence claim was finalised after 11 years.

Collins says: ‘The case was a watershed for the firm and the award an unexpected tribute to the team who had worked tirelessly on behalf of the people of Corby. A lot of work has come to us on the back of the case.’

Jo Cooper, head of Chambers at Perren Buildings, London, was next up for the Gazette award in 2011. The judges’ citation praised him for his ‘outstanding championing of solicitor-advocacy’ during a 20-year career in criminal practice as a full-time trial advocate. Cooper has appeared as a leading or ‘senior’ junior in complex criminal cases since 2000, including financial, supergrass, murder, national security and terrorism cases.

He has not rested on his laurels since winning the award. ‘I have been to Tanzania to the pro bono advocacy scheme that the Solicitors Association of Higher Court Advocates set up there,’ he says. ‘It is working well and is inexpensive to run. I’ve also been to Turkey to observe some of the show trials of lawyers and others.’

Has the Gazette award had any impact on his practice? ‘The recognition by the Law Society has helped open doors so that I have improved access to ambassadors and other VIPs,’ he replies. ‘Having the Law Society standing behind solicitor-advocates has always been very important.’

Karen Todner, managing director of London criminal defence firm Kaim Todner, was Gazette Legal Personality of the Year 2012. She has also kept busy since winning the award, appearing on both radio and TV in the last few weeks to comment on proceedings to extradite her client, Marc Skinner (aka Domenico Rancadore), to Italy. Her client had been living peacefully in West London for around 20 years before the police swooped upon his suburban home and took him into custody.

The Italian police allege that he is a member of the Sicilian mafia and, in that capacity, has previously engaged in extortion, racketeering and drug trafficking. He denies all charges, claiming that he left Italy precisely to escape any involvement with organised crime.

Todner’s 2012 award also focused on extradition proceedings: she acted for ‘Pentagon hacker’ Gary McKinnon, who has Asperger’s syndrome and a depressive illness. McKinnon faced up to 60 years in a US prison if extradited and found guilty. Todner won the case to prevent his extradition.

Last year’s winner was Elkan Abrahamson, partner and head of prison law at Liverpool firm Broudie Jackson Canter. His caseload over the last 30 years has courted controversy, with cases advocating prisoners’ rights to voting, condoms and artificial insemination. He also defended alleged rioters in the Toxteth disturbances of 1981.

It was Abrahamson’s untiring work on the 1989 Hillsborough disaster – he is still acting for 19 of the victims’ families – that caught the attention of the 2013 Gazette award’s judges. The tragedy unfolded during an FA Cup semi-final match, at which 96 Liverpool supporters died. Successive inquiries have failed to come up with a proper explanation for the disaster, although the finger of blame is increasingly being directed at errors committed by the police, other emergency services and the management of the Hillsborough football ground.

What does he hope to gain from the fresh inquests? ‘The families have struggled for so long to get at the truth and just want to know why their loved ones died,’ Abrahamson said. ‘The survivors, too, were all injured in some way and are still having flashbacks and suffering from post-traumatic stress disorder. They deserve the truth, but nothing substantial is going to happen, maybe just a few sacrificial lambs.’

So there you have it: two criminal solicitors, one civil litigator and a prison law solicitor have so far won the Gazette Legal Personality of the Year Award. There are many other categories, as listed above. Put in your nomination and help ring the changes!