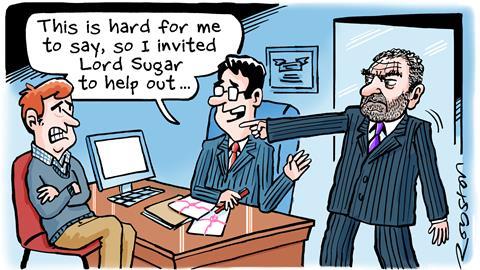 How to: sack a client

Grania Langdon-Down offers a guide to ceasing to act and how to avoid any reputational damage.

Easter is fast approaching, so is it time to spring clean your client list and ‘consciously uncouple’ from those that are more of a drain than an asset?

Clearly those client relationships that turn toxic and end up bleeding time and resources need to be cut short. But, given the huge number of mergers and acquisitions, and changes in practice areas, there may also be longstanding relationships that no longer fit with the firm’s new direction.

So what are the legal and professional conduct obligations involved in ceasing to act for a client and what steps can be taken to avoid any reputational fallout?

The bottom line is that, while a client can in principle sack their solicitor without giving notice or a reason, a solicitor can only stop acting for a client with good reason and on reasonable notice, or with the client’s consent.

The relationship between solicitor and client is a contractual one. The Solicitors Regulation Authority Code of Conduct 2011 sets out in chapter 1 that solicitors must treat their clients fairly and comply with the law and the code when deciding to terminate instructions.

This includes considering whether you should cease to act because you cannot act in the client’s best interests and, if you stop, explaining to the client their possible options for pursuing their matter. This does not mean finding alternative representation, although a solicitor can do that, but it does mean ensuring the client is aware of deadlines and court dates.

The reason for stopping has to be good, says the SRA, rather than ‘very good’. It gives examples including: the client losing mental capacity, but not in all cases; a breakdown in trust and confidence; the client insisting the solicitor does something that would put the solicitor in breach of their professional obligations; and a conflict of interest between the client and solicitor or between two or more clients.

According to the SRA, ‘reasonable’ notice will depend on the circumstances of the case and the reason for terminating the retainer. For example, if the reason is related to non-payment of costs, then it is likely that terminating the day before a court hearing could be considered unreasonable. However, if the solicitor ceased acting some weeks before the court hearing this may be considered reasonable. A useful rule of thumb, the SRA suggests, is how long it would take a new solicitor picking up this case from scratch to get up to speed – always assuming the client chooses to instruct a new solicitor.

In conveyancing cases, reasonable notice can generally be given prior to exchange but it is more difficult to do so afterwards. In a court setting, a solicitor could have to stop acting without any notice if they become aware the client is misleading the court.

When it comes to client care letters and terms of business, Law Society practice notes advise making sure the exact scope of the retainer is recorded to limit potential for dispute, as well as outlining the circumstances when you would terminate it and that fees would be payable up to that point. It also suggests noting that if the retainer is terminated without good reason then the solicitor may not be able to require the client to pay for work done up to that point.

With litigation, once a solicitor has agreed to act in a case they must act until the – sometimes bitter – end; based on Underwood, Son & Piper v Lewis [1894] 2 Q.B. 306, a solicitor’s retainer is one of entire contract.

In Richard Buxton (Solicitors) v Huw Llewelyn Paul Mills-Owens and the Law Society (Intervener) [2010] EWCA Civ 122, the Court of Appeal considered whether solicitors could terminate their retainer because they had been instructed to advance points that they considered to be unarguable and whether they were entitled to recover their profit costs.

The costs judge and court at first instance decided the firm could not terminate the retainer, even though the instructions were ‘doomed to disaster’, and so was not entitled to profit costs.

But the Court of Appeal said the firm had good reason to stop acting, adding: ‘The common law rule that a solicitor is entitled to be paid for all the work he has done prior to termination if he terminates for good reason has been part of our law for almost 200 years.’

Richard Buxton, the firm’s senior partner, says his advice is to start off with terms of business that expressly exclude ‘entire contract’.

‘This should mean that if you do terminate a retainer wrongly, you may be liable for the damages resulting, but not for the complete loss of your profit costs. If you detect difficulties with your client, sort them out at the earliest possible stage. If they do lead to you terminating the retainer, the reasonableness of doing that will partly depend on how close you are to a court hearing and what opportunity the client has to take other advice.’

The Court of Appeal warned against going to court with an unarguable case. But this can cause serious difficulties, Buxton says, simply because people have different views on arguability – and there are many cases that some may consider unarguable which ultimately succeed.

‘If you or counsel consider a case to be unarguable, that needs to be bottomed out with the client at the earliest possible stage to see if alternative ways forward can be found,’ he recommends. ‘Although these situations can involve difficult discussions and judgement calls, on balance the duty at least imposes a useful discipline on solicitors and counsel.’

With criminal litigation, the Criminal Procedure Rules say solicitors need compelling reasons to withdraw representation, while there is case law to say that the decision is down to the solicitor not the court.

Breaking up: a checklist

Solicitor-advocate and legal commentator David Burrows has come up with a checklist for practitioners wanting to terminate a client relationship. Following these steps will enable you to recover any outstanding costs and protect yourself from a counter-claim in breach of contract, he says.

Ian Kelcey, senior partner of Kelcey & Hall and former chair of the Criminal Law Solicitors’ Association, says the common triggers for withdrawing are conflict – for instance if you are acting for more than one defendant, or your client makes material changes to their evidence without a reasonable explanation.

He says solicitors are not responsible for finding the client alternative representation, ‘although if they are legally aided you are supposed to signpost them to someone. In practice, I usually give the client a list of three competent firms or I will ring one and arrange to send the client to them with a letter confirming I have no objection to the transfer of legal aid to save time. Firms will do that on a reciprocal basis.’

Kelcey does not generally set out reasons for terminating the relationship in the retainer because he will have done his risk compliance at the outset: ‘But I will scope everything out in the retainer so it is very clear what it covers.’

If it is a privately paying client, Kelcey asks for an amount up front and bills against that before requesting further payments on account: ‘If you are coming up to trial and you need to pay counsel fees but the client hasn’t put you in funds, then you would go to court and ask to be taken off the record. You would be committing economic suicide if you paid counsel fees yourself.’

With transactional work, David Bacon, senior partner of Northampton firm Borneo Martell Turner Coulston, says: ‘You need to be very clear in your retainer if you are going to exclude any points – such as advice on tax issues. If you define the scope of what you are going to do, it can be the basis for ending representation if a client demands you do something outside your field of expertise. But if it is fudged, you could be open to challenge and it may mean you have to forego fees on the whole job.’

Tony Guise, director of Guise Solicitors, a specialist law firm providing costs, regulatory and compliance advice, raises two other issues. The grounds for terminating a CFA-based retainer are the same as for a non-CFA based retainer; namely the starting point is the terms of the CFA and what that agreement allows, while assignment of the CFA to another lawyer is possible in limited circumstances.

In Blankley v Central Manchester and Manchester Children’s University Hospitals NHS Trust [2015] EWCA Civ 18, the Court of Appeal confirmed that a solicitor’s retainer is not automatically terminated if the client becomes incapacitated, and nor is a CFA.

In relation to his own firm, Guise includes in the firm’s terms of business that a retainer may be terminated for: non-payment of sums required on account; not accepting reasonable advice;  giving instructions inconsistent with the law and refusing to accept that is the case;  not providing timely instructions; and not  co-operating with reasonable requests for documents and/or other material information.

‘It only happens very occasionally that we have to terminate a retainer,’ he says. ‘What it generally boils down to is the client is in a mess. We haven’t been able to perform the miracle we never promised to perform so the client decides not to pay. But we always pursue our fees and we always recover.’

He stresses the need to have safeguards in place to flag up conflicts and to do as much as one can to minimise the possibility of money laundering or other illegality – both when the retainer is formed and continuously throughout the life of a retainer.

‘Sacking a client for other reasons, such as a failure to pay or fundamental disagreement, can carry with it risks to a firm’s reputation at the hands of the unscrupulous client,’ he warns.

A good internal training regime and support from the compliance department, led by the COLP and COFA, is vital to get the message through to all levels of fee-earner and non-fee-earner alike: ‘You must have the experience to recognise when a retainer goes sour and have that conversation with the client, so you address the situation quickly in order to protect your firm and focus on your other clients.’

If you get it wrong, a client can complain to the Legal Ombudsman. According to ombudsman Jason Chapman, complaints generally involve a perceived breakdown in the client/solicitor relationship or a case being stopped because it no longer meets the 51% chance of success. Where solicitors stop acting in a CFA it is generally because of fraudulent representations or lack of co-operation by the client.

Chapman says most of the cessations are entirely justified. Where he has been critical is over the timing – in leaving the client in the lurch, rather than the decision itself.

Viv Williams, chief executive of 360 Legal Group, says: ‘I know of a number of firms that have a monthly review of clients and sack the bottom 10% of their client base: generally a focused approach by letter to clients, suggesting that either you have increased fees or you are no longer delivering the type of work they require will suffice.’

Rather than have a separate protocol for ending a client relationship, she recommends having the profile of the ideal client at the heart of your business development strategy so you step away from things that do not fit.

‘Be picky about the work and clients you take on in the first place because if you don’t, it will get messy down the line,’ Rodway says.