Cramp in court: solicitors limber up for London Marathon

On Sunday I’ll be fortunate and mad enough to run the Virgin Money London Marathon. With a busy day job and never ending responsibilities at home, finding the time to train has been nothing short of a nightmare. So I was curious to know how marathon training has been for solicitors joining me at the start line.

Finding time to train has been a struggle for Katherine Rayden, founder of St Albans firm Rayden Solicitors, who is running for Mencap.

Rayden, who has been training two to three times a week, tells me: 'The best weekday for me has been Wednesday morning as I take my daughter swimming at 6am and can fit a run in before work. We have a shower at the office which has had a lot of use but there have been a few early morning meetings where my hair has been wet and my face has been more red than normal. 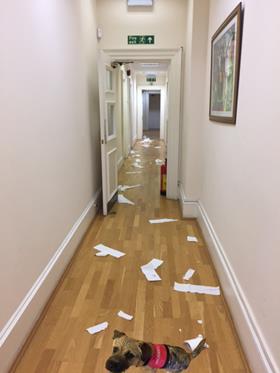 'There was also a moment where, as I showered in the office, Monty [my dog and our official office pet] found a toilet roll and obliterated it along the hallway - the running high soon disappeared.’

Hackney Community Law Centre housing solicitor Kevin Long is raising money for Lambeth Law Centre. He recalls: ’Nailed a long run to court, changed into suit, neck an espresso, hearing begins. About to open our case when a muscle cramp seizes up my thigh.

'Grimacing in pain I stare at the judge. “Is everything OK Mr Long?’

For Graeme Fraser, a partner in the family department at London firm Hunters incorporating May, May & Merrimans, a recent challenge was presenting at family law group Resolution’s national conference during the peak training period.

Fraser is chair of Resolution's cohabitation committee and an elected member of the national committee.

'So I found myself regularly on a treadmill in addition to the rigours of a full conference schedule, which included chairing a cohabitation workshop to around 100 delegates,’ he recalls.

Fraser is running the marathon for Alzheimer’s Research UK in memory of his father, O. Bernard Fraser, who was involved with the Law Society legal aid appeals committee which he chaired for several years.

Early riser Sarah Hughes, a partner at London firm Anthony Gold Solicitors, has been getting up at 5.30am to fit in training sessions before work, 'which usually means leaving the house in the dark early hours of the morning, and returning home in the dark hours of the night… but that’s pretty standard among most lawyers I guess, even without marathon training!’

Hughes, who is raising money for the London Legal Support Trust, recalls attempting to wear high heels for client meetings and networking events, 'when your legs and feet are so sore from pounding the pavement in the mornings and weekends’. Another challenge? 'Having to resist the drinks at networking events so that you can survive your run the following morning,’ she says.

Lucy Phoenix, an associate at London firm Wedlake Bell, recalls jogging through Regent's Park 'and a man dressed up from head to toe as an archbishop came sprinting past us on his own'. Being overtaken was 'pretty deflating', says Phoenix, who is raising money for Leonard Cheshire Disability, 'but it did attract some bemused looks and smiles from the public'.

Meanwhile Sunday's event is part of a bigger challenge for Jon Belcher, senior solicitor at national firm Blake Morgan. Belcher, who is based at the firm's Cardiff office, will be taking on a 100km (62 mile) race in July.

To warm up for Sunday, Belcher took part in his first ‘ultra’ marathon - 33 miles - at the start of this month. He says he surprised himself and everyone else by finishing second overall.

Belcher, who is raising money for Oasis Cardiff, has been trying to fit in the training miles in the evenings. He says: 'It hasn’t always been easy but running is such a good way of clearing your head after a tough day in work.’

Also joining solicitors at the start line is High Court judge Mr Justice Charles Haddon-Cave, who will be legging it to raise money for the London Legal Support Trust.

Best of luck to all the runners taking part on Sunday. See you at the finish line (I hope).