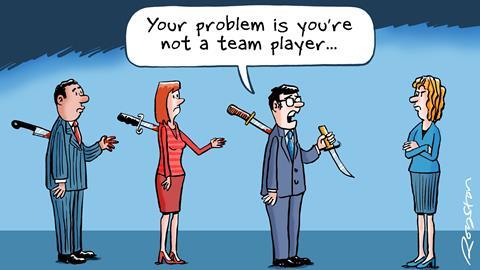 How to: deal with problem partners

The partnership model makes parting company a complex affair. But this is often the outcome when serious difficulties arise, hears Jonathan Rayner.

Partnerships may sound like collegiate affairs. But the Gazette has heard them likened to the most dysfunctional family you will ever meet – yet 10 times worse. Backstabbing is their national sport and, to mix metaphors, partnerships are a minefield when disputes arise.

What do you do, for example, about a named partner of a small City firm who bills £125,000 a year, but draws – for historical reasons – £500,000? The disjoint between billings and income is unsustainable. And yet, in many people’s eyes, that named partner is the embodiment of the firm. Something has to change, but what? And will the firm survive the change?

The maverick partner is another familiar figure. He or she often brings in the business, can be the rainmaker of all rainmakers, but is no team player. They will do things their way or not at all, effectively holding the firm hostage by threatening to leave if they are not allowed free rein. They are loath to delegate or provide direction to less senior colleagues, and they refuse to participate in new initiatives. They stop the firm building a coherent identity and common purpose, but they generate lots of fee income. Can you ‘sack’ them, even if you want to – and on what grounds?

The dishonest partner should be the simplest to deal with. A report to the Solicitors Regulation Authority and the job is done. Of course, if you are the whistleblower and the partner is innocent of all wrongdoing, then the atmosphere in the firm is going to become, to put it mildly, tense – and your future in it uncertain. You must be absolutely sure of the facts, but how precisely do you set about investigating in-depth a partner in your own firm?

Do you sneak around at night when everyone else has gone home? And do not forget, this could be someone with whom you have worked for years. You have shared triumphs and disappointments, not to mention the firm’s Christmas lunches. The partner could even have been a guest at your child’s wedding. It is not so simple, after all.

These are the type of challenges that Ronnie Fox, principal of City employment firm Fox and a specialist in partnership disputes, has been addressing for years. He tells the Gazette that by the time problems come to him, softer approaches – such as offers of mentoring or a change of practice area – have failed. The partner is going to leave and all that is left is to ensure they leave with their integrity intact and the firm’s reputation unsullied. ‘The first thing I do is look at the underlying documents,’ Fox says. ‘You’d be surprised how many large and well-known firms are without up-to-date partnership agreements.’

Problem partners can have a detrimental impact on every member of the firm and also reduce income and profits. Do any of the partners in your firm exhibit any of the following behaviours?

He helps firms ‘formulate proposals [for the partners in question] that err on the side of generous’ and give them what they really want. ‘Do they want to retire? Move to another firm? Develop an existing interest in photography?’ Fox says. ‘It’s good that the offer should be on the side of generous because if they approach another lawyer for a second opinion, they are likely to be told to accept it.’ Most important of all, he says, firms should ‘treat the partners fairly and give them ample time to put their own points of view’.

A potent weapon in Fox’s armoury is what he calls ‘reverse headhunting’. He gives the example of a partnership of 20 that wants to reduce its headcount to 19 and, more specifically, wants to see a partner called Joe Bloggs leave the firm. ‘I ask a trusted headhunter to approach Joe Bloggs and place him in another firm,’ says Fox. ‘Everyone is happy. My client has reduced its number of partners and Joe Bloggs not only has a new job, he is also reassured that he is still a valued player in a competitive market.’

Fox has had to become ‘a bit of an amateur psychologist’ in the course of his career, he says: ‘You have to work out what different characters in a partnership want for themselves.’ Sometimes problem partners do not appreciate how they come across, he says, and it can be ‘an unhappy surprise after a 360-degree appraisal’ to find out. ‘I attend to the legal issues and, sometimes, bring in a psychotherapist,’ Fox says. ‘I can think of one case in particular where someone had no idea how wrong things were going for him in the firm. He spent one month with me agreeing departure terms and then six months with the psychotherapist.’

The Gazette next talks to Alan Turner, a Lancashire-based solicitor with Gordon Turner Employment Lawyers. In the course of a career that started in the 1940s, Turner has been a partner in one firm or another for around 50 years. He believes he has seen everything that a partnership can throw at him. ‘There was one lawyer,’ he recalls, ‘that I made up to partner after he had been with me 12 months. He was a very good lawyer, I was right about that, but as a partner he wasn’t scoring goals in terms of bringing in new business.

‘It still hurts me to this day, but I called him into a meeting and gave him an ultimatum: increase your billing or you’ll have to leave. He was too meticulous and just couldn’t turn the work around fast enough. I had to give him six months’ notice. He is still practising, I’m pleased to say, and is one of the best deputy district judges around.’

What you should do

Some simple measures to nip the problem in the bud or to stop a partner becoming a threat to the firm:

Michelle Chance, employment partner and partnership disputes specialist at City firm Kingsley Napley, tells the Gazette that the best-run firms have managing partners and financial directors to ‘keep tabs’ on partners’ billing and practice development. ‘Such firms,’ she says, ‘have billing targets, and annual and six-monthly appraisals for partners, the same as other fee-earners.’

Age can lead to a partner’s billing becoming reduced, she says. ‘As the partner becomes older, so do contacts, some of whom retire or are replaced. The partner’s reputation may attract new business, but if not, then they will likely be managed out of the business. Nobody wants this. It can be embarrassing for the firm, because it suggests the managing partner can’t manage. It can also be humiliating and expensive for the departing partner. My role is to work on the retirement deed, which embraces financial and confidentiality agreements, and also ensures that the reputation of the individual and firm alike remain intact.’

It was back in the bad old days of the late 1980s, when one particular partner – loved by clients, tolerated by fellow partners – would not only turn up to the office most mornings drunk, but also told a female legal executive that it would be helpful if she slept with a major client. He would sometimes arrange for prostitutes to come to the office.

‘They’d arrive at reception not looking at all like prospective clients,’ the Gazette is told. ‘They would leave with him and he would return, alone, late afternoon.’ A recession put paid to the firm, whereupon the partner set up a new partnership. ‘It didn’t last long,’ the Gazette hears. ‘He was jailed for stealing from the client account.’ It could never happen these days, of course. Or could it?

Another common problem is when partners leave to join a rival firm. ‘You can’t stop partners leaving,’ says Chance, ‘but you can lessen the impact.’ Some partnership agreements contain clauses stopping two or more partners giving notice at the same time. Firms can delay a long time before repaying a departing equity partner’s capital, which can be a deterrent, although if the partner has been earning a great deal it does not have much effect. ‘Firms also try and hold partners to restrictive covenants,’ she says, ‘preventing them from taking clients with them, although these are not always enforceable, particularly if the partners can successfully argue that the covenant amounts to a restraint of trade.’

Employment partner-designate at City firm CM Murray, Anna Birtwistle, tells the Gazette that well-managed firms have up-to-date processes both for dealing with problem partners and for ensuring that partners do not become a problem in the first place. She instances hoarding work, so that the partner can bill more hours. ‘If the firm has an eat-what-you-kill policy for remuneration, then it also needs to reward partners for sharing or referring work across the firm. For example, if a corporate partner brings in some employment work, then the employment lawyers are able to bill for it, of course, but the corporate partner should also get some credit. This removes the incentive to hoard matters.’

She echoes Chance’s insistence that partners, in common with other lawyers in the practice, should have ‘rigorous annual appraisals’. These appraisals, Birtwistle says, should include a partner’s business plan for the coming year, as well as record whether last year’s targets have been met. She notes: ‘If a firm has never bothered to do partner appraisals, then there is no documented record of a partner’s past performance. He or she can quite legitimately say that you’ve never addressed under-performance with me before, so what’s suddenly changed and why are you doing so now?’

Birtwistle concludes: ‘Firms are advised to offer executive coaching to support partners that need it. Even if the problem is a behavioural issue, bringing in someone external to assist can make a real difference.’