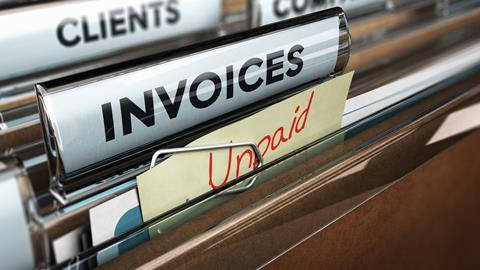 News focus: How long do law firms take to pay their bills?

Official figures reveal stark differences in how quickly law firms pay their invoices, with City giants among the laggards. But the process is a bit more complicated than simply having an efficient accounts department

How reliable have law firms been at paying invoices promptly during the pandemic? The Gazette asked one supplier to the profession and got this profane response: ‘We get around 50% of our invoices paid on standing order. Of the rest I reckon 40% are paid bang on time, 5% a bit late and less than 5% are effing bastards.’

Those with an interest in such figures have a useful resource at hand in the form of payment practice reports, found at the website gov.uk, which collates the time taken to pay invoices by LLPs and companies – including most leading law firms.

The figures are criticised in some quarters because some firms include disbursements in their invoice payments, which tend to inflate the time taken to pay third parties.

Certainly, the difference between best performing and worst is wide: based on the most recent six-month reporting period, Kennedys took 115 days on average to pay invoices; Gowling WLG and Travers Smith, by contrast, each took just 13 days.

A handful of firms took at least 70 days to pay invoices, including Clifford Chance (99), RPC (83), Taylor Wessing and Pennington Manches (both 74).

The average time taken to pay invoices across the top 50 was 41 days.

It is also instructive to note the firms who reported high proportions of invoices taking at least 61 days to be paid. Accountancy experts told the Gazette that most businesses would want to keep this proportion to under 25%, but it is higher than that for 12 firms in the top 50. In the case of Herbert Smith Freehills, Taylor Wessing, Kennedys, Eversheds Sutherland, Stephenson Harwood and RPC, at least 40% of invoices took more than two months to be paid.

Again, there are contrasting firms at the other end of the scale. Twelve firms had less than 10% of invoices taking two months to be paid, with Hill Dickinson clearing every debt in less than 60 days and 90% of them within a month. Hogan Lovells, CMS, Gowling WLG, Travers Smith and Trowers & Hamlins also paid at least 80% of invoices within the month.

Those firms where the figures are less impressive stress that the figures do not paint the whole picture, or can be misleading if taken at face value.

Eversheds Sutherland told the Gazette that its headline statistics include disbursements, which can be paid only when the firm has received payment from clients. A spokesperson said: ‘We are fully supportive of greater transparency in our payment practices and continually look to improve payment speed to suppliers. Our current average time to pay suppliers is 24 days (without disbursements) and we pay 85% of our invoices within a 30-day period.’

In the case of Herbert Smith Freehills, the firm reports separate figures for its LLP and services company – the second of which tends to deal with day-to-day operations and smaller suppliers.

A spokesperson said: ‘HSF LLP invoices mainly cover payments for professional services on matters (external counsel/barristers etc). In such cases, as is the norm, we pay those invoices once we are paid by our clients.’

Whatever the merits of the published figures, firms can assume that suppliers will take notice of the time lag between invoice and payment and reflect accordingly.

‘Having a 61 day-plus column which is the highest percentage of the three or perhaps even greater than 25% would certainly be a red flag,’ says Peter Noyce, partner with accountant Menzies, which provides business and consultancy services to the legal sector. He urges firms to consider whether their administrative or accounts teams are suitably resourced and look again at internal approval mechanisms for paying invoices to check they are not causing unnecessary delay.

Andrew Harris, partner with business advisory firm Hazlewoods, said most law firms have done their best to pay invoices on time throughout the pandemic, recognising the importance of a strong relationship with suppliers which avoids damage to their reputation.

Harris added: ‘The figures in the government reports are a good measure of the efficiency of a firm’s internal processes, but they are only one piece of the puzzle.

‘While having processes in place to enable firms to pay their suppliers quickly and on time is a good thing, this needs to work alongside careful management of work in progress, unbilled disbursements and debtors, so that firms themselves are paid quickly and on time by their clients. If not, firms will quickly find themselves running out of cash.’