News focus: McMillan Williams - a sign of the times?

Was McMillan Williams the first of many inevitable casualties of the Covid-19 pandemic, or were deeper structural problems to blame for the firm’s administration?

What caused the collapse of top-100 firm McMillan Williams, which went into administration last month with its remains salvaged by Taylor Rose TTKW?

The acquisition was completed as part of a pre-pack deal which saves (subject to a review later this year) 420 McMillan Williams jobs. The deal creates a combined £40m firm with 32 offices nationwide which enters the top 75 in terms of revenue. It will be the fifth largest residential conveyancer in the UK.

While Taylor Rose now aims to be a ‘leading player’ in the UK consumer law market, the MW inquest begins. The results will give an indication whether this is something particular to the failed firm or a sign of wider problems to come.

What did it for the firm? Was it the thirst for constant expansion, establishing a presence on dozens of high streets across the south-east? Certainly expansion involved an eye-catching level of debt: Gazette analysis of the firm’s most recent accounts, covering the year ended April 2019, reveal it accrued more than £20m in debts and took out 16 loans in six years. One such loan, which came with a 14% interest rate, was earmarked solely for paying practising certificate fees.

Or, was this the inevitable consequence of the Covid-19 outbreak, which quickly swallowed up a firm that relied heavily on a largely dormant conveyancing sector?

Steve Din, founder of investor Doorway Capital, which provided a £2.5m facility to MW, says the firm’s downfall was brought about by its strong high street presence and heavy reliance on conveyancing work, both of which were hit by the pandemic. Had the firm secured funding from the government’s Coronavirus Business Interruption Loan Scheme, Din believes it might have survived. 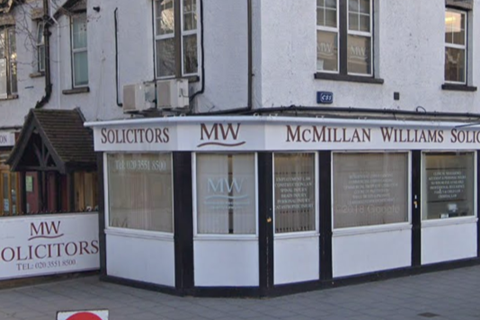 Joint administrator Sean Bucknall, of insolvency specialist Quantuma, said at the time of acquisition that MW’s high fixed-cost base and highly leveraged model left the firm particularly vulnerable to the fallout from the pandemic. He predicted this failure will be the first of many.

MW’s problems were both specific and symptomatic. Analysis of the 10 firms just behind it in terms of revenue shows that they collectively owed £94.4m as of April 2019 – two-thirds of which was due within a year. Such debts might have been manageable in normal times, but not now.

Opinions differ on whether banks can come to the rescue. The Gazette was told by one bank that it continues to lend to the legal sector, either through the various government-backed schemes or traditional routes. Another sector adviser told us that many firms stand on the brink and that lack of bank support will be the catalyst for their demise.

Andrew Hosking, a partner from Quantuma, estimates that 250 firms nationally may be restructured or forced to merge because of the crisis. He says government measures averted any immediate closure for most, but the demand for some areas of advice is unlikely to recover for some time. ‘[Government support] has allowed firms to effectively be cryogenically frozen on the assumption that the legal landscape would be relatively unchanged when the economy has been fully reawakened,’ he added.

‘This support has essentially allowed firms to freeze their businesses. However, the demand for certain legal disciplines is unlikely to recover for some time.’

Din said the pandemic has not in itself reduced Doorway’s appetite to invest in legal services. For the moment, firms have actually been less inclined to seek investment, but the position is deceptively calm and not likely to last.

‘Smaller firms appear to have had much greater success than their mid-sized counterparts in generating working capital from banks and HMRC, which has led to reduced demand for funding from Doorway among small firms,’ he said. ‘Once bank loans and deferred VAT have to be repaid by these firms and/or the furlough scheme is wound down, that demand is likely to return.’

He added that a significant reduction in new business among personal injury firms means fee-earners are focusing on settling ex isting matters, which is generating cash in the short term.

‘Once marketing activity picks up later this year, assuming lockdown continues to ease, that operating cashflow may quickly disappear and lead to significant funding pressures among law firms,’ says Din.