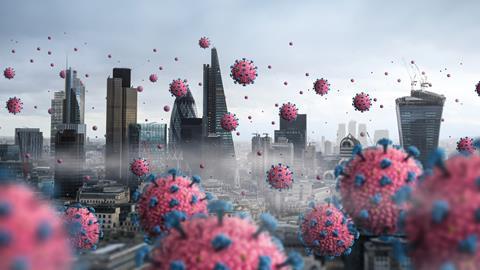 If you observe City firms during the pandemic for long enough, you begin to experience a curious case of double vision.

Viewed from one angle, the legal landscape is bright, with firms beginning to ease emergency measures introduced at the height of lockdown. Pay reviews are back, along with partner promotions and bonuses. Eversheds Sutherland is set to end its flex scheme, under which busy teams lost up to a fifth of their earnings, while Slaughter and May has reinstated partner pay, and Hogan Lovells has backdated salary reviews to 1 May.

But the City’s buoyant announcements raise uncomfortable questions. If finances are so robust, did firms really need to utilise the government’s job retention scheme? It is understood that over 30 of the 50 biggest UK law firms by revenue accepted furlough cash.

So should more firms be following the lead of Herbert Smith Freehills, Osborne Clarke and Norton Rose Fulbright, which have repaid their furlough money in full?

The second image of the City is different, however. Redundancy consultations are coming thick and fast with Ince, Weightmans, Squire Patton Boggs, Shoosmiths, Irwin Mitchell, Reed Smith, Bryan Cave Leighton Paisner and BLM all announcing job cuts since the pandemic took hold. Moreover, there are fears that once the furlough programme ends on 31 October – to be replaced by the less generous Job Support Scheme – staff who remain off work will be axed.

In light of this peculiar dichotomy, should firms be appeasing taxpayers with large sums to HM Revenue & Customs? Or should they be hoarding their reserves in preparation for a difficult winter?

‘The message I’ve been getting from firms – certainly from the top-50 – is very much that things have not been as bad as anticipated,’ said Tony Williams, principal of legal consultancy Jomati and former managing partner at Clifford Chance. ‘If they haven’t already brought back everyone who’s been furloughed, they are likely to.’

However, Williams said commentators should be ‘very careful’ before lambasting partners for sitting on furlough cash. ‘The real challenge people have at the moment is the fact we’re only halfway through the financial year. If you could tell me what the end of the financial year will look like, then I can give you an answer to whether or not I should repay the furlough [money]. We thought we had a roadmap in September, but it’s all gone into a screeching reverse now.’

Solid financial results for the year just gone do not guarantee a straightforward 2020/21, Williams added.

Despite market confidence, some redundancies – particularly among business support staff – are expected, both in London and beyond.

Fran Eccles-Bech, chief executive of Manchester Law Society, told the Gazette that most medium-sized regional firms still have staff on furlough. ‘It appears how hard someone has been hit depends on the type of work – for example low-value PI appears to be down but employment and family are up,’ she said.

‘It appears that non-fee-earning support staff are being reconsidered at a large number of firms, with most expecting to make some redundancies. This is particularly those staff who support in-office working (courier, post room team, reception, office assistants and so on) and the job losses being considered are either where the job is truly no longer needed or because working practice has changed.’

Law firms – particularly those in the City – were criticised in the wake of the 2008 financial crash for quickly sacking junior lawyers and deferring training contracts. This time around, it seems that support staff will bear the brunt. However, once again, it may be businesses feel the long-term effects.

‘Saving 10 or 20 secretarial-type roles doesn’t move the dial dramatically in terms of law firm profitability,’ says Williams. ‘Is it cost-effective for a lawyer to be working out their own travel arrangements? Is it better for them to be focusing on fee-earning?’

Evidence of short-sightedness is already beginning to emerge, with one trainee telling the Gazette that she is being forced to carry out administrative work after both team secretaries lost their jobs.

While the City seems well placed to endure the immediate impact of the pandemic, therefore, it must be careful to avoid a more insidious case of ‘long Covid’.