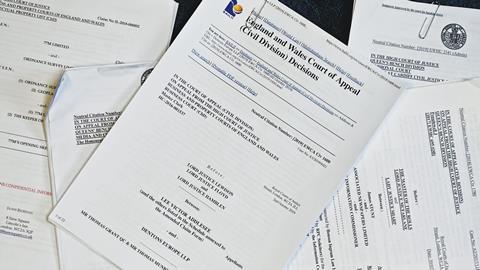 A legal analytics company’s attempt to clarify the copyright status of court judgments in England and Wales has kicked off a row between the Ministry of Justice and the British and Irish Legal Information Institute (BAILII). The charity, which publishes the most widely used free resource of online case law, reacted angrily to the MoJ’s statement that businesses were free to download judgments under the Open Government Licence.

The statement followed a request by the France-based company Doctrine, which analyses court judgments with artificial intelligence technology and provides an information service to lawyers and other subscribers. It describes as its mission ‘to open and make transparent the law’ and currently works on French and EU court judgments. Antoine Dusséaux, co-founder, told the Gazette that five months ago he asked the MoJ to explain the conditions for the reuse of case law. ‘Four months later, I got an answer, saying everything was reuseable.’

However BAILII, which has a contract with the MoJ to provide free access to case law, disagreed. It tweeted a statement from retired High Court judge Sir Ross Cranston, chair of BAILII Trustees.

He said: ‘We have seen the letter from the MoJ. Written without consulting us and in ignorance of our status. No one can download judgments from our website without our permission.’

BAILII told the Gazette that the ministry did not consult it about the contents of its clarification, did not copy the letter to BAILII and did not make its contents known to the organisation. ‘We are in correspondence with the MoJ and seeking a meeting,’ a spokesperson said.

Machine analysis of court judgments is routine in the US, but relatively new in Europe.

Doctrine has not set a date for a UK launch. One problem, said Dusséaux, is that only 1% of court judgments are published in England and Wales, a much smaller proportion than in France. 'I think people at the MoJ are committed to change,' Dusséaux said. He suggested that a way to post judgments automatically might be found through the courts modernisation programme.

In the meantime 'I hope that we can start a dialogue to find a solution to preserve Baillie's activities and to make more judgments available to everybody.'