Calls are growing for a wider inquiry into the role of lawyers in prosecuting Post Office subpostmasters wrongfully convicted of fraud in the Horizon computer system scandal.

The group of 39 former subpostmasters last week had their convictions quashed at the Court of Appeal after judges found they did not steal money from the Post Office. Instead, the court identified a culture in the Post Office of ‘seeking to avoid legal obligations’ because this would be too inconvenient or costly.

It emerged today the SRA is looking into what happened, with a spokesperson confirming the regulator is 'gathering all relevant information before deciding on any next steps'.

The private prosecution convictions were based on the faulty Horizon computer system installed in branches. Senior figures at the Post Office consistently sought to shut down criticism of the technology.

Now commentators and lawyers for the wrongly convicted are demanding that any inquiry into what happened includes the role of legal advisers within the Post Office. A public inquiry chaired by Sir Wyn Williams, president of Welsh Tribunals, is currently considering what went wrong in relation to Horizon, but its terms of reference do not include the Post Office’s prosecution function or matters of criminal law.

In a joint statement issued by Paul Harris and Oneija Taher of Edward Fail, Bradshaw & Waterson and Sam Stein QC and Lynton Orrett of Nexus Chambers, lawyers for some of the accused, said there must be an urgent criminal investigation into the actions of those at the Post Office to consider their possible culpability in more than 10 years of ‘abuse of the court’s process’. 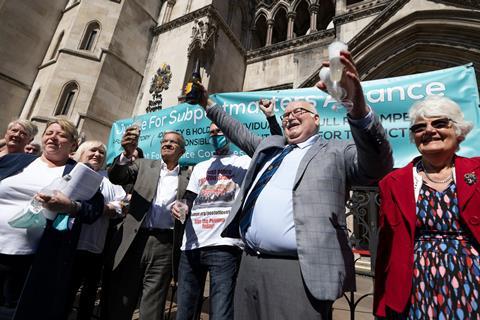 They added: ‘The investigation must be wider and must question financial investigators, senior management and lawyers acting on behalf of the Post Office.’

The group said the Post Office was aware of problems with Horizon and ‘sat’ on this information for many years, spending a huge amount of money trying to defend their omissions through instructing numerous lawyers.

The Court of Appeal judgment noted that, as recently as 2017, when a group litigation order was made in the High Court by some of the subpostmasters, this was ‘bitterly contested’ and the Post Office continued to assert that Horizon was robust and reliable.

Neil Hudgell, executive chairman of national firm Hudgell Solicitors which represented 29 former subpostmasters, said the focus now had to switch to investigating Post Office officials who ‘maliciously ruined the lives of innocent people by prosecuting them in pursuit of profits’.

Hudgell said the Post Office engaged in ‘legal gymnastics to seek to persuade the court away from finding a clear systematic abuse of process of the criminal law’.

Richard Moorhead, professor of law and professional ethics at Exeter Law School, said the SRA and BSB should investigate whether anyone should be held to account amid professional concerns about who was responsible for disclosure issues.

In a blog, Moorhead wrote: ‘If we ask the traditional question of all such scandals, "Where were the lawyers?" The only response is, ‘Where weren’t they? Because they were either at the heart of it or ought to have been. Not solely responsible, of course, but importantly responsible.’

The Post Office has apologised and stated that culture, practices and operating procedures have all changed. It has said it will assess the judgment to understand what further action may be required.