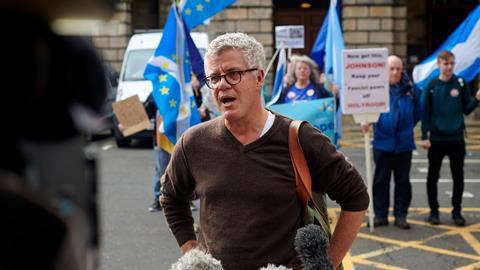 Campaigners who successfully challenged Boris Johnson's decision to suspend parliament in the Scottish courts have exceeded a £200,000 fundraising target, enabling them to take on the prime minister in the Supreme Court.

The government is appealing yesterday's decision of judges in Scotland that Johnson's advice to the Queen over prorogation was unlawful. Barrister Jolyon Maugham QC, founder of the Good Law Project which backed the challenge, subsequently said 'we still need to raise funds to continue our defence of parliamentary democracy in the Supreme Court'. Within hours of his tweet, the £200,000 'stretch' target was met.

The government's appeal will be heard next Tuesday at the Supreme Court, as will an appeal by campaigner Gina Miller, whose challenge to the prorogation was dismissed by the High Court of England and Wales last week.

Handing down the written judgment in Miller's case yesterday, the lord chief justice said the parties had agreed a costs order, in which the claimant was to pay the defendant's costs, to be assessed if not agreed.

Following the Scotland decision, London firm Mishcon de Reya, on behalf of Miller, wrote to the Government Legal Department demanding to know what steps are being taken to reconvene parliament.

The firm said there is now 'no legal basis' for parliament to be prorogued. 'We note that the prime minister has stated in the Miller case that he "will take the necessary steps to comply with the terms of any declaration made by the court (see paragraph 60 of the prime minister's detailed grounds and skeleton argument). Accordingly, please inform us what steps will be taken to reconvene parliament with immediate effect. In our view, parliament can simply resume its functions,' the letter said.

Edinburgh and Aberdeen firm Balfour+Manson, for the petitioners in the Scotland case, wrote to the Office of the Advocate General for Scotland. The firm said any argument that parliament 'in practice' is prorogued is now spurious.

The firm added: 'Parliament is either prorogued or it is not. The Court of Session has made an order that it is not. There is no other valid position in either fact or law,' the letter said. 'Please, therefore, (a) acknowledge publicly and immediately that parliament does not stand prorogued and (b) resume the business of parliament including, but not limited to, responding to scheduled and urgent questions and to the Humble Address that the House of Commons resolved to present to Her Majesty the Queen on 9 September 2019.'