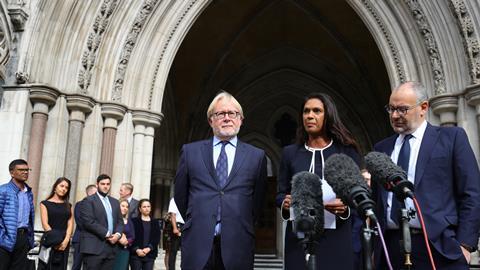 Campaigner Gina Miller has lost her High Court challenge to Boris Johnson's decision to prorogue parliament for five weeks - but has been given the go-ahead to take her fight to the Supreme Court.

The lord chief justice, Lord Burnett of Maldon, who heard the case with the master of the rolls, Sir Terence Etherton, and the president of the Queen's Bench Division, Dame Victoria Sharp, granted permission to apply for judicial review but said Miller's claim 'must be dismissed'. Lord Burnett said the Supreme Court has indicated it will hear the case on 17 September along with any appeal from a similar challenge being heard in Scotland.

The lord chief justice was asked when the written judgment will be handed down. For Miller, Lord Pannick QC said: 'The Supreme Court needs to see that, we need to see that to make our written submissions to the Supreme Court.'

Lord Burnett replied: 'We are very conscious of that, Lord Pannick. Forgive me if we do not provide cast iron commitment to any date - but we fully expect you and the Supreme Court will have it in good time to take it into account on 17 September if that is the date on which the Supreme Court hears the case.'

The lord chief justice said the judges were 'very conscious over the last week the amount of work that has been done not only by counsel but by those behind them and many other people as well. We are grateful for the care taken by everyone to present the case in a way that enabled us to deal with it appropriately and at great speed.'

Speaking outside the Royal Courts of Justice, Miller said she plans to take her fight to the Supreme Court. 'My legal team and I will not give up the fight for democracy,' she concluded her statement.