The president of the Supreme Court has taken the constitutionally unusual step of publicly criticising a bill that is making its way through parliament. Lady Hale said the Divorce (Financial Provision) Bill, introduced by crossbench peer Baroness Deech, was 'more threatening' to the support system of the family than the perceived threat from no-fault divorce.

Lady Hale made her comments in a speech entitled 'What is a 21st Century Family', delivered at the International Centre for Family Law, Policy and Practice on 1 July but published by the Supreme Court yesterday.

Baroness Deech's bill had its third reading in the House of Lords in December. It is now before the Commons, though no date for a second reading has been set.

Under the bill, pre- and post-nuptial agreements would be binding provided certain conditions are met. Matrimonial property would be divided equally and spousal maintenance limited to five years unless the spouse would otherwise suffer serious financial hardship.

Lady Hale questioned the bill's 'one size fits all' approach. Referring to critics who say that 'no-fault' divorce legislation will weaken the stability of marriage, she said: 'More threatening in my view is Baroness Deech’s bill, which has made its way through the House of Lords and is now before the commons.’

She said: 'I can see the attractions of all of this when set against the agony, the uncertainty and the expense of seeking our tailor-made solutions. But I question how one size fits all can possible meet the justice of the case or fulfill the role of the family in shouldering the burdens which it has created rather than placing them upon the state. I fear that it assumes an equality between the spouses which is simply not there in many, perhaps most, cases.' 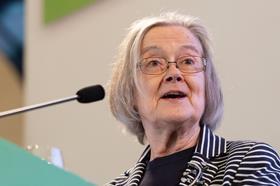 Lady Hale questioned the bill's 'one size fits all' approach

Lady Hale has made no secret of her support for divorce law reform. She said the government's Divorce, Dissolution and Separation Bill 'bears a remarkable resemblance to the proposals which the Law Commission made back in 1990: the replacement of the need to prove facts before getting a decree with a waiting period during which the post-divorce arrangements can be agreed. But the idea is to strengthen the system by reducing the acrimony involved in having to prove facts and so create a better climate for making amicable agreements about the financial and child arrangements'.

Lady Hale also directly attacked government policy over the Supreme Court case through which opposite-sex couples won the right to enter civil partnerships. Lady Hale said: 'The astonishing thing about that case was how hard the government had fought it at every stage. They successfully claimed in the High Court that this was not sufficiently close to the core values protected by article 8 to engage the duty not to discriminate - but if the right to respect for family life is not about the legal recognition for family relationships what is it about?'

Lady Hale took up her presidential post in September 2017 and retires in January.