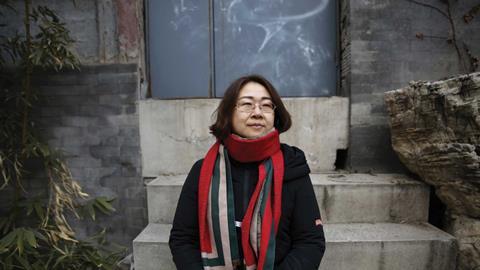 A secret Chinese court has convicted a prominent human rights lawyer on charges of subverting state power and sentenced him to three years in prison, suspended for four years. Li Heping, who in 2008 received the Council of Bars and Law Societies in Europe’s annual human rights award, was one of at least 200 rights lawyers and activists detained in July 2015 and among four lawyers still in detention.

According to the Associated Press news agency, the suspended sentence by a court in the eastern city of Tianjin means that Li should now be released – but could be arrested and jailed at any point. The trial was held behind closed doors on Tuesday because the case involved state secrets, the court said.

Li became well known internationally for defending the Christian churches and advocates for free speech. His wife (pictured) has said authorities subjected him to torture, including electric shocks.

This week an international group of legal bodies, including the International Observatory of Lawyers in Danger, sent a letter to Guo Shengkun, minister for public security, raising concerns about Li and harassment and surveillance on his family. The letter noted that ‘Information has been reported about sustained surveillance and continued threats that are imposed respectively on Ms.Wang Qiaoling, wife of detained lawyer Li Heping and on Ms. Li Wenzu, wife of detained lawyer Wang Quanzhang.’

CCTV cameras have been installed in front of their home and that they are followed wherever they go, intimidated by the police, constantly surrounded by unidentified men and threatened with being taken away, the letter states.

‘Attempts to ostracize and to crush the lives of relatives of detained lawyers is of great concern to us. In addition, we remain also preoccupied with the health condition of lawyers who remain detained since July 2015.’

In his message of thanks to the CCBE for its award – which he was unable to collect in person – Li wrote: ‘Human rights abuses should be punished all over the world. All the lawyers and Human Rights defenders should work together towards an increasingly fair justice, a more human civilization,and progress. As a person, I know how weak the force of a person is, but I strongly believe that, through joint efforts of all people, human rights protection will grow much stronger in the future.’