I started my law degree at the University of East Anglia (UEA) in 2010 and, after reaching the final in a mooting competition, I did a mini-pupillage with a family law barrister who became an incredible mentor. She introduced me to Norfolk Community Law Service (NCLS), a charity which identifies unmet legal need and works with partner agencies to develop free services.

There were only a few undergraduate volunteers at NCLS at the time. I joined on the domestic abuse advice service, which was delivered in conjunction with Leeway (a charity that supports victims of domestic abuse), and the housing department at Norwich City Council. I was exposed to the awful situations of victims and quickly realised how important charities like NCLS are. 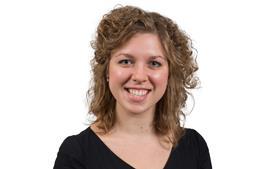 I remember calling my dad and crying about the dire situations that some victims are in, but I felt immensely glad that I could do something about it. NCLS’s service provision grew over the course of my undergraduate degree, as would be expected given the legal aid cuts.

NCLS took on more undergraduate volunteers from UEA and I was involved with training other students and streamlining service provision.

I graduated in 2013, having finished runner-up in the LawWorks & Attorney General’s student pro bono awards for ‘Best Contribution by an Individual Student’. I continued volunteering during my LPC as a McKenzie friend with the parental contact team, mainly for fathers who had lost contact with children due to mental health issues or prison sentences. We worked closely with the Norwich courts to enable these individuals to have a voice in private law proceedings.

I worked part-time at UEA as an associate tutor to support NCLS’s undergraduate volunteer programme, which was now taking on over 40 new undergraduates a year to support its services. It was moving to listen to the students’ motivations for becoming involved in pro bono work. It was not just that volunteering is the right thing to do, it was that so many students had been touched by the law even at an early age and they wanted to help others access justice.

UEA and NCLS’s partnership won the LawWorks Best Partnership in Pro Bono award in 2014, which was an amazing step in being recognised on a national level.

I started my training contract with Cozens-Hardy, a firm based in Norwich that has consistently supported NCLS. Cozens-Hardy’s partners respected the work that I had done with NCLS.

I now work in civil litigation, advising on broad matters such as debt recovery and contract while also specialising in landlord/tenant and property litigation. My voluntary work has stood me in good stead to see the bigger picture in disputes. Everyone is motivated by something and sometimes you just need to get to the bottom of that thing to resolve the dispute.

It was a very proud moment to sign my NCLS application form to enter on to the general advice rota as a one-year qualified solicitor, where I will advise and signpost individuals on a whole host of issues.