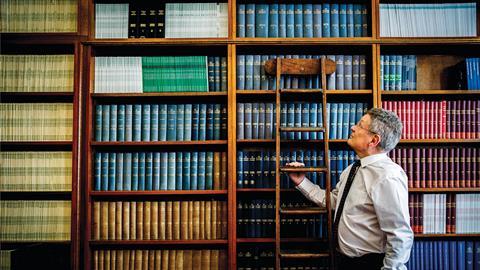 One of a kind

Gary Hickinbottom, sole solicitor at the Court of Appeal, began his judicial career as a parking adjudicator. He talks to Grania Langdon-Down about a ‘colossal’ workload and his mission to achieve a more diverse bench.

Amid a merry-go-round of appointments, promotions and retirements among the senior judiciary, Gary Hickinbottom, the lone solicitor Lord Justice of Appeal, has been quietly going about his business.

In the 15 months since he took up his new role, he has gone from winger to presiding judge and, in a recent appeal, the high turnover in the Court of Appeal meant he was the most senior of the three-judge panel.

It is that new dynamic of sitting with two other judges which he singles out as the biggest change from the High Court – ‘to put it bluntly, the level of debate is really high because, guess what, these people are really clever and they ask really good questions’.

Chatting in his spacious book-lined room in the Royal Courts of Justice, he is diffident about being singled out for this interview. But he has always shouldered his role as flag bearer for solicitor-judges with good grace, having been the most senior representative since Lord Collins retired from the Supreme Court in 2011.

While he will have been relieved at the appointment last year of two former solicitors as High Court judges – Mrs Justice Clare Moulder and Mr Justice Peter Lane – both were already full-time, salaried judges. None of the other solicitor applicants in that exercise were recommended for appointment. And that is a pattern identified in the latest Judicial Appointment Commission (JAC) figures, which show that solicitor representation reduced with the increasing seniority of recruitment exercises.

The question of why solicitors are not reaching the higher ranks, given the bigger pool of potential applicants, has exercised Hickinbottom for many years. He had first-hand experience of his own law firm being less than enthusiastic about his judicial ambitions and spent 18 months as a senior liaison judge for diversity trying to address this barrier. Visiting firms in central London and the City with Alexandra Marks, then solicitor commissioner with the JAC, he found responses ranging from supportive to downright antagonistic.

There has been some recent pushback from City solicitors, who say ‘don’t blame the pool – do a better selling job’ in the face of recent judicial attitude surveys which painted a bleak picture of low morale.

Hickinbottom acknowledges that becoming a judge is ‘not necessarily a very attractive package in many areas’. But he also maintains that ‘some firms are dead set against their partners even walking the dog, because they want every hour they can out of them. We have tried to think of everything. Rather than four weeks a year for five years, we have said what about sitting for a term to get a real idea of what is involved?’

He is also cautious about encouraging applications from top-quality solicitors to the senior bench by removing the requirement for previous judicial experience. He considers it ‘unwise’ to appoint people who have not had the opportunity to see if they like the job, because it would be ‘crushing’ if they did not and there is no way back into practice.

Applying is certainly a gamble for a successful City solicitor who may be earning seven figures and so faces a huge salary cut, while the new pension structure means they may not effectively have a judicial pension.

It is also not a ‘winding-down’ job post-retirement. Hickinbottom gives a taster of life at the High Court. During his eight years in the Queen’s Bench Division, he travelled the country, sitting on murders, managing group personal injury actions and sitting in the Administrative Court and Planning Court ‘almost everywhere’. He was always keen to take on leadership roles and was the Queen’s Bench Division liaison judge for every circuit except the South Eastern, as well as the Admin Court judge responsible for Wales.

‘There is a relentlessness to the job and it isn’t for everyone,’ he acknowledges. ‘Generally speaking, as a QB judge you have to do some crime, with which I agree. But, if you’re a 60-year-old commercial solicitor, do you want to go to Carlisle to do a murder trial?’

On the plus side, he says the system is much more flexible now, with examples of judges with child or parental care responsibilities being sent to Southwark rather than Cumbria.

But while the appointment process is much better than the old system, he says there are drawbacks. ‘You can’t say to someone “become a circuit judge for three to five years and we will make you a High Court judge”, because that person will have to go into an open competition with some heavy-hitting barristers and they may be a circuit judge for life.’

But it is right that judicial selection is a competitive process, he says, ‘because not every solicitor, no matter how good, is going to make a good judge, particularly at the High Court level, because solicitors give advice – judges make decisions. In the criminal Court of Appeal, we’ll do eight appeals a day and give eight ex tempore judgments and that requires a different skill set from a tax adviser.

‘But what those solicitors who do succeed bring with them is pragmatism, even if they don’t have masses of court experience, which is very valuable.’

From the autumn, Hickinbottom and his fellow judges could find themselves enjoying a higher profile as they debate complex issues with constitutional or highly personal implications in front of audiences around the world as part of a ‘revolutionary’ project to live-stream hearings on YouTube.

Broadcasting of Court of Appeal hearings has been possible for the past five years via pooled footage, but it only happens infrequently. However, YouTube is opening up similar opportunities to the Supreme Court, which has shown there is an appetite for coverage of big cases. In 2017-18, more than 137,800 people watched hearings live and 75,000 people watched using on-demand services. The online viewing figures from the Supreme Court, BBC and ITN website feeds for the Article 50 Brexit case totalled more than 300,000 on the hearing’s first day.

It is sometimes suggested that media outlets have campaigned for cameras in court because of the potential to broadcast lurid details of celebrity-linked cases. But the Court of Appeal is no stranger to headline-grabbing matters. Among its 1,100 cases in the past year were those related to gravely ill babies Charlie Gard andAlfie Evans.

From the autumn, Hickinbottom and his fellow judges could find themselves enjoying a higher profile as they debate complex issues with constitutional or highly personal implications in front of audiences around the world as part of a ‘revolutionary’ project to live-stream hearings on YouTube.

Broadcasting of Court of Appeal hearings has been possible for the past five years via pooled footage, but it only happens infrequently. However, YouTube is opening up similar opportunities to the Supreme Court, which has shown there is an appetite for coverage of big cases. In 2017-18, more than 137,800 people watched hearings live and 75,000 people watched using on-demand services. The online viewing figures from the Supreme Court, BBC and ITN website feeds for the Article 50 Brexit case totalled more than 300,000 on the hearing’s first day.

It is sometimes suggested that media outlets have campaigned for cameras in court because of the potential to broadcast lurid details of celebrity-linked cases. But the Court of Appeal is no stranger to headline-grabbing matters. Among its 1,100 cases in the past year were those related to gravely ill babies Charlie Gard and Alfie Evans.

For solicitors who rarely get to court, there will soon be a chance to see just what it is like to be a senior judge. The Court of Appeal broadcasting project (see box), driven by Master of the Rolls Terence Etherton, will start in the three largest courts in the civil division of the Royal Courts of Justice. As the final destination for most appeals in England and Wales, it handled 1,100 cases in the past 12 months. So, how does Hickinbottom view being on camera?

‘I don’t think we’re going to be that popular here,’ he says cautiously. ‘We did a public law case recently which was terribly hard work but really enjoyable, with very good barristers. There were lots of people in court and the hearing was live-tweeted as the case will have a big impact for lots of people.

‘But, while I don’t mind being filmed, the case took two very full days to complete. It’s a bit like cricket, viewers like 20/20 but they don’t always want to watch a full test match.’

He looked at the Twitter reports after the case. ‘I don’t engage in social media, but if someone puts out something on a case I’m sitting on, I don’t see why I shouldn’t look at it. In this case, it was all sensible, fair, live reporting of what was being said, much like a football match.’

Given appeals are all about the law and do not involve evidence, he did not think live streaming would alter their dynamics. ‘In high-profile cases, one suspects the opening may be slightly longer and more florid, but it is still a debate.’

What is likely to raise comment is not just the level of argument and the quality of the decision-making, but also the make-up of the bench. Hickinbottom is a passionate supporter of diversity of gender, ethnicity and social background. ‘The judiciary needs people with, collectively, broader life experiences to strengthen it,’ he stresses.

For many solicitors, their route to senior judicial posts is often idiosyncratic and very different to that of their QC competitors.

Hickinbottom’s career has been characterised by a willingness to ‘have a crack’ at most things. At a Law Society event last year to mark his promotion to the Court of Appeal, he quoted the former Appeal judge Sir John Laws, who described it as ‘not just a job; it is not even just a vocation, it is an adventure’.

And it has certainly been an adventure for Hickinbottom. He grew up in the West Midlands, where his father was a baker. From the local state school, he won an open scholarship at Oxford, followed by articles and eventually partnership in a City firm – with a substantial pro bono practice in death penalty cases in the Bahamas.

What is intriguing is his approach to building his judicial career. He cut his teeth at what he calls the ‘sharp end’ of judging – as a parking adjudicator, sitting across from irate motorists and telling them there was no possible ground of appeal. It was a shrewd way of getting some judicial flying hours.

Since then, Hickinbottom has worked his way up the judicial career ladder via a recordership in North, then South, Wales; sitting in a civil case in the Falklands; becoming chief social security commissioner and deputy senior president of tribunals; and being appointed to the High Court in 2008.

At 62, Hickinbottom continues to take on extra tasks – he is the supervising judge for general public law cases alongside Lord Justice Singh, another who has led the way as the first non-white judge in the Court of Appeal. While there is much hand-wringing over how to fill vacancies in the High Court, he is relishing his new role.

‘The Court of Appeal is relentless because the workload is just colossal. But I enjoy the judicial work, full stop,’ he says. ‘One day I might wake up and think “this is awful” but I can’t see that happening before I have to retire.’

Sole solicitor at the Court of Appeal