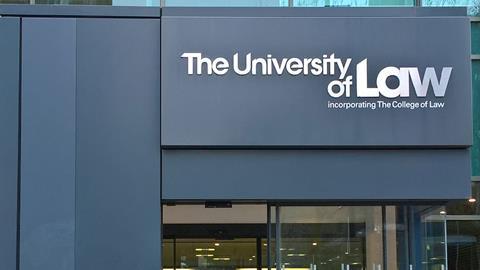 Hopes of removing ‘artificial and unjustifiable’ barriers to the profession have been dealt a blow as costs for the new SQE are unveiled, renewing fears of a two-tier system

The Solicitors Qualifying Exam could halve the cost of qualification. So claimed a legal consultancy last summer, after revealing that £21m is wasted each year by students who never get training contracts.

This optimistic prediction was dealt a blow last week when the University of Law – one of the UK’s largest law schools with 10 campuses globally – unveiled its SQE offering. In a long-awaited announcement, ULaw said its new legal practice master’s course will cost between £12,000 and £16,500 and will prepare students for both parts of the SQE. It will eventually replace the Legal Practice Course (LPC), which costs graduates up to £17,500.

Under the new regime, the Solicitors Regulation Authority does not prescribe specific training programmes. However, ULaw advises non-law graduates to complete a conversion course before embarking on the LLM. So far, so familiar. For students based in London these two courses will cost a total of £28,750 – £1,000 less than the existing two-stage route.

However, this does not include the price of the exams themselves: £3,980 payable to the regulator. All in, the cost of qualifying at one of the UK’s most popular law schools has not fallen, or even stayed the same. It has gone up.

That is not to say cheaper options are not available. An organisation that prepares foreign lawyers for the Qualified Lawyers Transfer Scheme has created a ‘super-exam’ course, costing less than £5,000. Meanwhile, US education giant Barbri has developed an online SQE prep course for £6,000.

However, ULaw is a major player in the market and a favourite of City firms. And while its announcement did not claim to have made training cheaper, it did stress that its new courses go above and beyond SQE criteria. They have been developed to ‘meet the requirements of legal recruiters, who have said they want their future trainees to have knowledge and skills beyond the SQE’.

This was reiterated by ULaw’s pro vice-chancellor Professor Peter Crisp. ‘Our new programmes will enable students to pass the SQE with confidence as well as making them office-ready for practice in a law firm by empowering them with the knowledge, skills and behaviours needed for a successful career in law,’ he said.

As predicted by critics, a two-tier system is looming, dividing students into two camps: those who complete postgraduate degrees which stretch beyond SQE requirements, and those who can afford merely to pass the exams.

ULaw’s major rival BPP had yet to publish SQE fees at press time. However, a consortium of six City firms – Freshfields, Linklaters, Slaughter and May, Herbert Smith Freehills, Hogan Lovells and Norton Rose Fulbright – has already appointed the university to create a bespoke programme ‘extending far beyond the basic requirements of the SQE’. Once again, the SRA’s vision of a centralised assessment which places all candidates on a level playing field appears hopelessly optimistic.

The Chartered Institute of Legal Executives has already spotted a gap in the market. Claiming the SRA’s mission to boost social mobility ‘has not gone far enough’, CILEX has developed a new qualification route costing a maximum of £12,500, which enables students to attain full practice rights.

The access issue extends beyond prep courses and into firms. The Law Society’s Education and Training Committee is scrutinising the apprenticeship levy after a Council member claimed many firms are using it to fund traditional graduate training rather than genuine apprenticeships (news, 8 February).

Genuinely new training models are ‘few and far between’. It appears, therefore, that a twin attack on diversity is under way. On the one hand, familiar expensive courses such as the LPC and GDL are being relabelled as SQE prep programmes. At the same time, training contracts are being reconfigured as apprenticeships.

So far, Reed Smith is one of the only City firms to announce a significant change in approach. On its new ‘SQE pathway’, graduates will undertake a mixture of study and office work before they embark on two years of qualifying work experience, allowing them to earn as they learn.

Similar City announcements could be on the way. For now, however, the SRA’s grand vision, and in spite of the regulator’s best intentions, attempts to remove ‘artificial and unjustifiable barriers’ to the profession could well establish another set of social mobility hurdles.