40
At court in the time of coronavirus 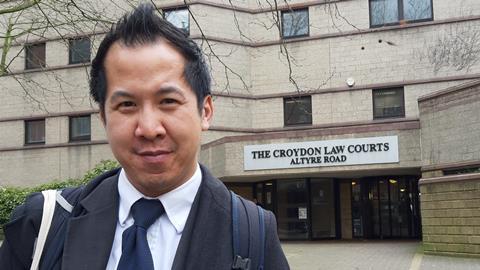 At court in the time of coronavirus

If it weren't for the security guards wearing face masks and latex gloves, or the handwashing posters on the toilet doors, you would never think, in the waiting room at Croydon County Court, that we were living through a coronavirus pandemic.

Less than 48 hours earlier the prime minister told the nation to avoid crowded places. No such luck if you were at Croydon, waiting for your case to be heard. Or for South West London Law Centres' Jeinsen Lam, who was the duty solicitor.

Keen not to get kicked out of a second court building this year, I informed the ushers who I was and what I was in court for. And then, I headed to a corner office, where Jeinsen was talking to a vulnerable mum who was 24 hours away from being evicted by her housing association landlord.

I listened as Jeinsen told the mum, whose son waited just outside, that he was going to ask the judge to suspend a warrant for eviction. 'The landlord has a very narrow view in their thinking. "Pay the money or we will evict you." The difference with you as opposed to me is you have a serious health problem. They cannot treat you like everyone else, which is what they have done. One size does not fit all possessions. I will go into court and see how it goes.'

I looked at the mum, who was now quietly crying.

We went into court where the mum, and her duty solicitor, asked the judge to suspend the warrant. 'There has been a change in circumstances,' Jeinsen told the judge.

At times the exchanges felt tense. Jeinsen explained his client's financial situation, her proposed payment plan to bring down some of the rent arrears, issues with housing benefit where too many deductions may have been made. At one point a calculator was brought out to work out disposable income.

In the end, the judge suspended possession for four weeks. Back in the consultation room, the client, relief etched on her face, told Jeinsen: 'It feels like a weight has been lifted off me so badly.' They didn't shake hands as she left, but she said she would when it was all over.

Seconds after she left, another member of the public walked in.

I asked Jeinsen later how the hearing would have went had it been conducted, as a result of the current climate, by phone or Skype.

He said: 'I personally think if you were minded to take someone's home away it's harder when the person is in the room and you literally have to look at them and watch their response in their presence. The immediacy of a hearing I think brings home what you are doing. You can see the client crying as the advocate is speaking. I think the problems with telephone and Skype are that they create an artificial barrier between the judge and defendant. With regards to advocacy I think you can pick up a lot more in person in terms of body language and that can help tailor your approach.'

Earlier this week the lord chief justice said it was unrealistic to suppose it will be business as usual, but maintained that it is important the administration of justice does not grind to a halt. As yesterday showed, there is no easy way to balance keeping the justice system functioning with the urgent demands of public health protection.