The lord chief justice today stepped into the controversy caused by lawyers being forced to attend court despite the government's appeal to cancel all non-essential travel. In a statement this lunchtime Lord Burnett of Maldon said it was ‘not realistic’ to suppose that it will be business as usual in any jurisdiction, although he maintained it is of 'vital importance that the administration of justice does not grind to a halt'.

His intervention followed outrage from lawyers at a justice minister's statement last night that courts would be 'operating normally' today. Neither courts minister Chris Philp nor HM Courts & Tribunals Service has said anything since the announcement. 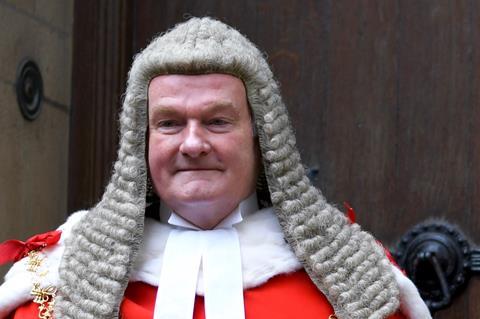 Lord Burnett of Maldon: ‘not realistic’ to suppose it will be business as usual in any jurisdiction

But reports have been widespread that judges and court staff have elected to either halt proceedings or reduce new cases. Burnett said: 'We continue to work closely with others in the justice system, including the Ministry of Justice and HMCTS, to work through the implications of the developing medical position for the operation of the courts.

'Given the rapidly evolving situation, there is an urgent need to increase the use of telephone and video technology immediately to hold remote hearings where possible. Emergency legislation is being drafted which is likely to contain clauses that expand the powers in criminal courts to use technology in a wider range of hearings.'

Pressure is mounting on the government to curb face-to-face hearings in line with the government's wider coronovirus outbreak guidance. The Criminal Bar Association called for a ‘temporary cessation’ to jury trials, while still opposing any effort to conduct trials without juries.

Meanwhile in Scotland, the courts and tribunals service has announced that no new criminal jury trials will be commenced until further notice.

It is possible ministers in England and Wales are trying to hold the line until tomorrow, when emergency legislation is expected to pave the way for greater use of video hearings.

Gavin Knox, solicitor for NHS Wales, tweeted: 'Cancel inquests. Hugely important for families but they are rarely time critical. Any jury inquests are surely a bad idea and would probably collapse as jurors pull out. They will take key medical staff away from where they are needed most.'

Barrister and mediator John de Waal QC pointed out this not just an issue affecting criminal justice and trials, adding: 'I am at Birmingham Civil Justice Centre on a property dispute. The court is heaving with people. It’s quite absurd. I am professionally obliged to be here but both taking a risk and posing a risk to others.'

Meanwhile, the Solicitors Disciplinary Tribunal will close from the end of this week’s hearings. All substantive hearings due to take place between 23 March and 9 April 2020 will be adjourned. The tribunal will review the position on an ongoing basis.